Ronald Klasko | MEET-USA.COM Portal
We use cookies to give you the best experience when you visit our website. By continuing to browse the site, you are agreeing to our use of cookies.
HomeAmerica from A to ZExperts catalogLawRonald Klasko
Add expert 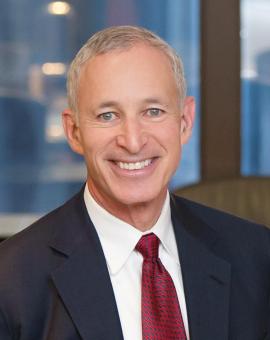 H. Ronald Klasko (Ron) is widely recognized by businesses, universities, hospitals, scholars, investors and other lawyers as one of the country’s leading immigration lawyers.

H. Ronald Klasko (Ron) is widely recognized by businesses, universities, hospitals, scholars, investors and other lawyers as one of the country’s leading immigration lawyers. A founding member of Klasko Immigration Law Partners, LLP and its Managing Partner, he has practiced immigration law exclusively over three decades.

Under his leadership, the firm has been chosen every year for the last ten years by the highly regarded Chambers Global; Ron himself is recognized annually as being in Band 1 of immigration lawyers by Chambers Global and Tier 1 in Best Lawyers in America©. In addition, he has also been repeatedly selected for inclusion in Lawdragon’s/Human Resource Executive’s list of The Most Powerful Employment Attorneys Guide, and was inducted into the Hall of Fame in 2018.  Who’s Who Legal in Corporate Immigration named him as the most highly regarded immigration lawyer in the world.

A former National President of the American Immigration Lawyers Association (AILA), Ron currently serves as Chair of the Administrative Litigation Task Force and is a member of the National Committee for the 2018-2019 term. He served as General Counsel of AILA for three Presidents and has been a member of its Board of Governors since 1980.  He has served as National Chair of AILA’s U.S. Department of Labor Liaison Committee and Business Immigration Committee, and he served as National Chair of that organization’s INS General Counsel Liaison Committee and the National Task Forces on Labor Certifications, H-1 visas, L-1 visas and Employer Sanctions. He completed his fifth term as Chair of the EB-5 Committee of the American Immigration Lawyers Association (AILA) in 2017. Ron is one of only three practicing attorneys ever honored with the AILA Founders Award for his contributions to immigration jurisprudence.

At the request of members of Congress and their staffs, Ron has testified before the U.S. House of Representatives Committee on the Judiciary and the U.S. Commission on Immigration Reform.  He has been invited to lecture and provide training to staff members and lawyers of the U.S. Department of Labor, U.S. Department of State, INS General Counsel Management Conference, Immigration Judges Association and U.S. Department of Justice.  In addition, he has been an Adjunct Professor of Immigration Law at Villanova University Law School and is a frequent lecturer on immigration law subjects.

A member of the prestigious Alliance of Business Immigration Lawyers, Ron is the co-author of the two volume Employers’ Immigration Compliance Guide (Matthew Bender 1985).  He is a graduate of the University of Pennsylvania Law School.