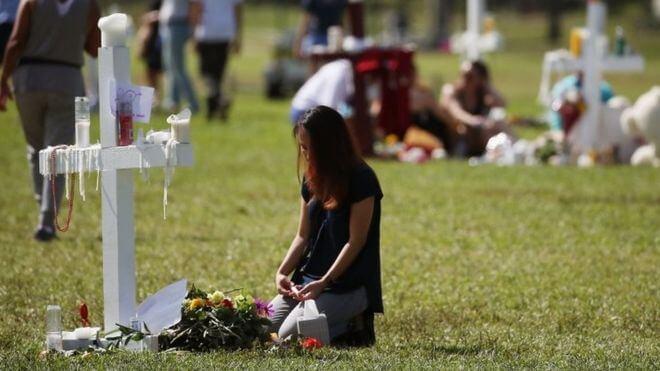 After a tragic incident that occurred last week at the Marjorie School of Stoneman Douglas in Parkland, Florida, when a former student of the school, Nicholas Cruz, shot 17 people, America's students decided not to keep silent about this problem any more, since this was not the first such case. And the voice of a high school student Emma Gonzalez, who survived in this tragedy, now sounds louder than all the speeches of politicians.

"If the president wants to come up to me and tell me in person that it was a terrible tragedy that should never happen, but in the long run there's nothing to be done about it, I would really like to ask the president how much money he received from the National Rifle association ", - said Emma Gonzalez. "But I already know - 30 million dollars! Divide this amount by the number of firearms in the USA for one and a half months only this year, and you will receive $ 5,800. Is this the price of a human life for you, Mr. Trump? Shame on you, and every politician who accepts donations from the NRA, shame on you! "

And very many in the USA, including show business stars, now support her and other school students who condemn the authorities and advance with an initiative to hold a march on March 24 demanding to take tangible measures to prevent new shooting in schools and tighten grip over weapons.

Meanwhile, US President Donald Trump criticizes the FBI for "missing the signals" about Nicholas Cruz's intentions.

"It is very sad that the FBI missed all the multiple signals that a school shooter gave from Florida. This is unacceptable. They spend too much time trying to prove Russian collusion with Trump campaign - and there is no collusion. Go back to the main job so that we all can be proud!"- he wrote on Twitter.
US Attorney General Jeff Sessions has already ordered an immediate audit of the actions of the Ministry of Justice and FBI in response to warnings about potential massacres.

But the crux of the problem is that acquisition and carrying of firearms in the USA is permitted by law, but the accompanying measures, such as careful checking of potential buyers and possibility of confiscating weapons through court from people who are dangerous to others, who work badly or are not employed at all. Especially since, arms manufacturers in the United States are interested in increasing sales.