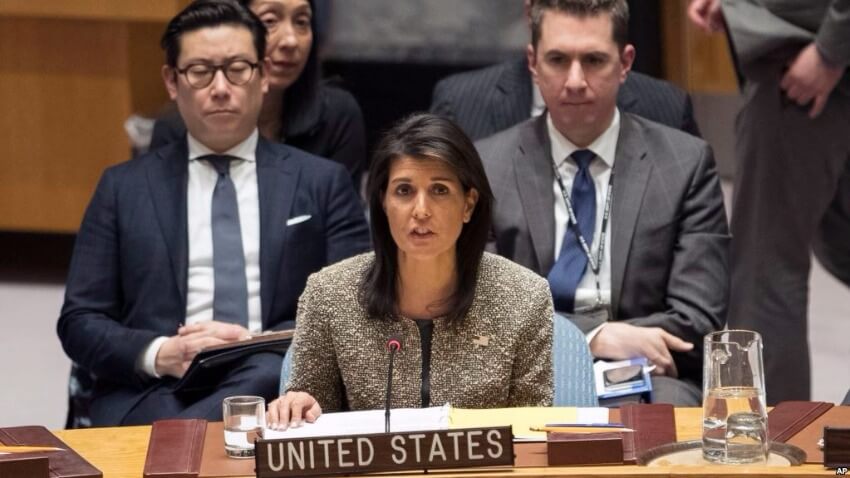 "Any decisions in the immigration policy of our country should be made by Americans and only Americans. We will ourselves decide how to better control our borders and who will be allowed to enter our country, "said Nikki Haley, US ambassador to the United Nations, after it was announced on Saturday that the United States would not become a party to the Global Agreement on Migration.

"We will continue to participate in the work of the UN on many other issues, but in this case we simply can not faithfully support a process that could undermine the US sovereign right to enforce our immigration laws and protect our borders," Secretary of State Rex Tillerson stressed in his statement.
"The US supports international cooperation on migration issues, but the main responsibility of sovereign states is to ensure the security, orderliness and legality of migration," he added.

The process of developing a Global Agreement on Migration began in 2016, when the presidential post in the USA was occupied by Barack Obama. Then the American party joined the New York Declaration adopted on September 19, 2016, according to which all 193 member countries of the UN pledged to adopt in 2018 two global agreements that will deal with management of migration flows and measures regarding refugees.

The New York Declaration on Refugees and Migrants expresses the political will of world leaders aimed at saving lives, protecting human rights and equitable distribution of responsibility at the global level. World leaders have voiced exactly how each country will ensure fulfillment of these obligations.

These obligations include the following:

- To protect the human rights of all refugees and migrants regardless of their status. In particular, this is about the rights of women and girls and encouraging their full, equal and effective participation in search for solutions.

- To prevent and suppress sexual and gender-based violence.

- To provide support to the countries that are saving, receiving and resettling large numbers of refugees and migrants.

- To work on elimination the practice of keeping children in custody in order to determine their migration status.

- To strongly condemn xenophobia against refugees and migrants and support a global campaign to combat this phenomenon.

- To strengthen positive contribution of migrants to the economic and social development of host countries.

- To strengthen delivery of humanitarian and development assistance to the most affected countries, including through innovative multilateral financial solutions in order to fully correct a funding gap.

- To implement a set of measures in regard to refugees on the basis of a new mechanism that will establish responsibility of Member States, civil society partners and United Nations system in the situations involving large-scale displacement or prolonged stay of refugees.

- To find new housing for all refugees, whom the United Nations High Commissioner for Refugees (UNHCR) recognizes as needing resettlement, and to increase the opportunities for refugees to move to other countries, for example through labor mobility programs or educational programs.

- To strengthen global management of migration by including the International Organization for Migration in the United Nations system.
The New York Declaration also contains specific plans subsequent upon these commitments.

- To start negotiations that will facilitate holding of an international conference and adoption of a global Agreement on safe, orderly and regulated migration in 2018. The agreement reached on the intention to develop this comprehensive framework is a fateful decision. It means that migration, like other areas of international relations, will be regulated on the basis of a number of universal principles and approaches.

- To develop guidelines for treatment of migrants who are in vulnerable situations. These guidelines will be of particular importance for unaccompanied children in the transit process, which is becoming more and more.

- To achieve a more equitable distribution of responsibility for reception and support of refugees around the world by adopting Global Refugee Agreement in 2018.

If one carefully read all the points of the New York Declaration, which should be reflected in the Global Migration Agreement, it becomes clear why the USA interrupted its participation in this process, taking into account the current reforms in the country's immigration policy, which Donald Trump carries out.

Nikki Haley said that Trump took this decision and stressed that "Americans must determine their own immigration policies." "Although the USA is proud of its leadership in migration and refugees, a global approach is incompatible with the sovereignty of the country," she added.
The chairman of the UN General Assembly, Miroslav Lajcak, expressed regret over the decision of the United States, saying that no nation can manage international migration alone. "The role of the United States in this process is crucial, because they historically accept a lot of people from all over the world being the home to the largest number of international migrants. Thus, they have the experience and knowledge to ensure successful results of this process."