US president's resignation threatens with public disorders and economic crisis

The famous journalist, analyst and chronicler of American life Mikhail Taratuta expressed his opinion on this issue in today's MK issue in the article titled "A Beautiful Sex Will Lead Trump to Impeachment." 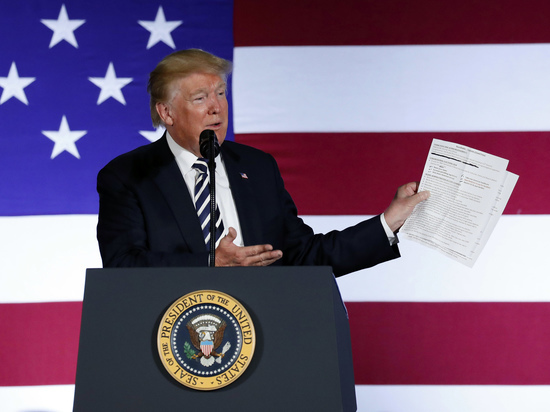 The possibility of impeachment to President Trump is stirring the political beau monde of Washington with new strength. Congressmen, experts, press - everyone calculates the chances of Donald Trump to stay in power.

The cause for a next burst of passion was a recent deal with investigation of Michael Cohen, a personal lawyer and, as the press still calls him, a personal "rainmaker" of Donald Trump. Cohen confessed himself guilty in a number of violations of the law - tax avoidance, provision of false information to financial bodies, but the main thing is violation of the law on elections, for which the investigation threatened him with a 65-year length of imprisonment. But it willingly reduced the term for him to 3-5 years of imprisonment in exchange for confessing his guilt.

The piquancy of this deal was that Cohen did not just admit that he violated the election laws, but he did so on behalf of and on the orders of his client, transparently hinting at the president. However, this does not waive responsibility.

At the center of this story there are two enterprising ladies who claim to have once had a sexual relationship with Trump, which, incidentally, ipso facto is not a crime in itself. This sometimes happens with the presidents. The law does not prohibit the fact that these ladies were paid a decent price for not carrying around the world the intimate details of their claims. So much the more, they raised the noise exactly when a future owner of the White House needed it least - during the election race.

But if everything is good, then what is bad? A bad thing, as the investigation suspects, that procedurally this money could have been paid in violation of the election legislation. But even worse is another: shutting the mouth of irrepressible ladies, Cohen and a presidential candidate tried to influence the outcome of the election. They say, if Trump's shenanigans were timely known to the general public, then it is possible that this could somehow change voters' preferences.

The attempt to influence the outcome of the election is a serious crime, one can say it is a direct path to impeachment, and even a prison term. And here the eyes of the opponents of Donald Trump - and this is, if not half the country, then certainly half of the voters - have caught fire with hope. And the others’ eyes just are shining with confidence that they will finally be able to finish with the hated Trump. If it's not a relationship with the Russians, if not his sympathy for Putin, then let these grasping women would at least wean off the country from the nightmarish Trump.

Meanwhile, a famous lawyer, law professor at Harvard University, Alan Dershowitz, notes that it is too early to bury Trump, because the investigation has a problem – it is necessary to prove the suspicions. The fact that Cohen, even under pressure, admitted his guilt - is wonderful, for his sins he will be held responsible. But everything is much more complicated with Trump.

It would seem what is complicated here and what should be proved here? It turns out that something is still necessary: for example, the very fact of the president's connection with these women, which he denies. Yes, Trump is known for his weakness for a beautiful sex. But this still does not prove anything, it does not seem that the investigation had witnesses who "experienced first-hand ".

“But how is it that”? - the opponents of Trump get all steamed up, because we know for sure that Cohen paid these women for silence! Does not this prove that the candidate’s face in the trough obviously and that Cohen's mouth was jammed with money for the obvious purpose: not to let compromising material pour out, so as not to damage the candidate?!

“No, it does not prove anything” - Trump's supporters stand firmly behind. There are many cases where women blackmailed wealthy men, threatening to make a public scandal. They built their accusations without reasons, but the men nevertheless yielded to blackmail. They obediently paid adventurers - just to avoid a public scandal, gossip and crooked looks.

And even if the intimacy really took place! The first reaction of any man caught in this situation, says Trump's defenders, to do everything possible so that this story does not come to the wife and children, if, of course, his family is dear to him. He will pay money, will dodge for his betrayal does not come out. Not elections, but the desire to save the family led Trump, if he really was unfaithful to Melania. And try to prove the contrary!

The investigation so far fails to prove that money was sent to blackmailers in violation of the electoral legislation.

It is not improbable that in the upcoming elections the Republicans will lose their preponderance in the House of Representatives. And then the democrats will take revenge: they will hold hearings on impeachment of Trump, vote accordingly and pass their opinion to the Senate. But here everything, apparently, will stop. According to all forecasts, Republicans will keep the majority in the Upper House. Not to mention the fact that to remove the president from power it is required to recruit not less than two thirds of the senators’ votes. And this means that for impeachment of Trump the votes of Democrats will not be enough, and the votes of the Republicans will be needed. But where to get them, if today Trump almost completely controls his party?

However, all this is just a theory. In real life, events can turn out in a more dramatic way. It looks like Trump feels it too. For the first time he himself started talking about impeachment and, apparently, not by chance frightens the public, stating that in the event of his impeachment the markets will collapse, and the revolution will begin in the country. Economists from the camp of his opponents assure that the US economy will somehow survive the loss of Trump. Experts from another camp are not so sure of this, pointing out that all market indices raised literally the day after Trump was declared a new president of the United States. And Trump for an incomplete two years spending on this post in fact did a lot to raise the American economy. Therefore, the market is likely to react with a fall and the economy - with a crisis to his possible resignation.

Well, what about the revolution that Trump predicts? Will it be the revolution or not, but, judging by intensity of passions, fierce and irreconcilable nature of those who stand up for and against Trump (and their ratio is roughly equal), serious riots are ensured in the country. And even without any impeachment clashes on ideological grounds, sometimes with severe injuries and even fatalities, from time to time flare up in different parts of the country. We saw this in Charlottesville, Portland, Berkeley ... Even a fierce opponent of the president, director of National Intelligence James Clapper, dismissed by him, says that impeaching Trump is a bad idea, as at least a third of the country will consider this a quiet coup carried out by his opponents.

With all the ensuing consequences in a form of riots, I will add myself. In my opinion, the most reasonable decision for the democrats and all the other opponents of the acting president would be, of course, clenching teeth, to wait for a next election and then to prove their right to lead the country. But it does not look like these fighters lay down their arms. They will fight with Trump until his last day at the White House. They will overburden the president with lawsuits and public accusations, slow down any of his undertakings, deservedly and undeservedly throw mud on him at every corner - that is, doing exactly what they have been doing since the moment of nomination of Trump as a Republican presidential candidate.

All this would be a purely domestic affair of America, if the fight with Trump did not boomerang on our pockets, did not affect the technological future of our country and world security. For the first time in history, Russia has become a factor in the domestic political struggle in the United States. Tramp's reputation was strongly tied to Russia and Putin by the opponents of the president. According to their logic, the worse, the more terrible and horrible the Russians are, the more ugly and dangerous for the USA Trump himself is, which constantly gives rise to new accusations against Moscow and, consequently, new sanctions. However, for the sake of justice, it must be said that we, by some of our actions, have also invested pretty in what is happening today in our relations with the United States. But this is a completely different story.