US dollar | MEET-USA.COM Portal
We use cookies to give you the best experience when you visit our website. By continuing to browse the site, you are agreeing to our use of cookies.
HomeCommunityArticlesU.S. EconomicsUS dollar
Add article

The US dollar is the national currency of the United States, which concurrently is the main reserve currency of the world. For written designation of a monetary unit its symbolic value $ or an alternative abbreviation in a form of a Latin letter for USD is used. The exclusive right of emission for this type of currency belongs to the US Federal Reserve System, which acts as the state central bank.

The history of appearance of the US dollar

The history of the origin of the American dollar dates back to the second half of the 18th century. This historical period was for the United States the era of the birth and formation of its own monetization system, based on use of the currently available form of payment - silver dollar coins weighing 27 grams with a silver content of 24.1 grams.

In 1794 in the United States first dollars of other metal alloys began to be minted. Their composition and format of coinage were regulated by the Congress. On June 6, 1875, metal dollars were officially recognized as the national state funds. In 1797, the first paper greens in the form of banknotes became available to the American citizens. Their final design was approved by the central government only in the middle of the XIX century, when state bodies were able to take bank emission under their personal control.

The appearance of a dollar

The main distinguishing feature of an American dollar bill is a characteristic greenish shade. It still remains a mystery why it was decided to print banknotes exactly in this color. On each denomination of a monetary unit there is necessarily a portrait of one of the outstanding presidents of the United States of America, who headed the country at different intervals: 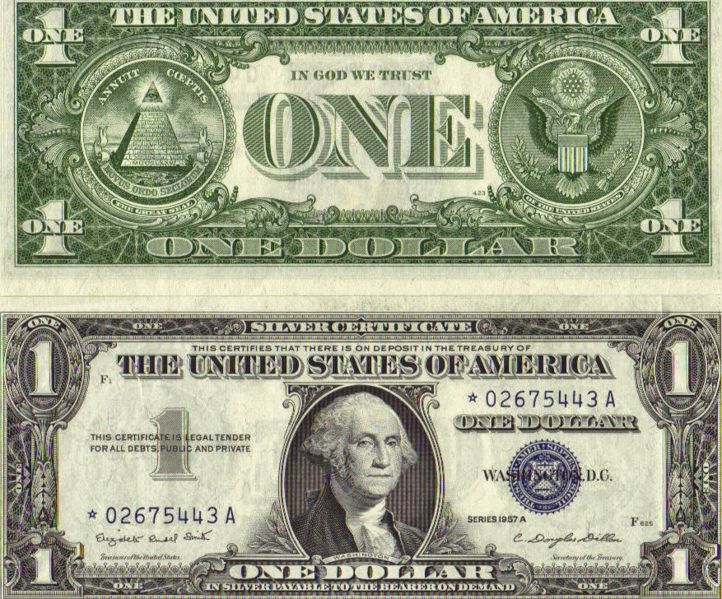 One dollar. On the front side the first President George Washington is depicted, on the back there is an unfinished pyramid with a "The All-Seeing Eye of Providence" on the top. 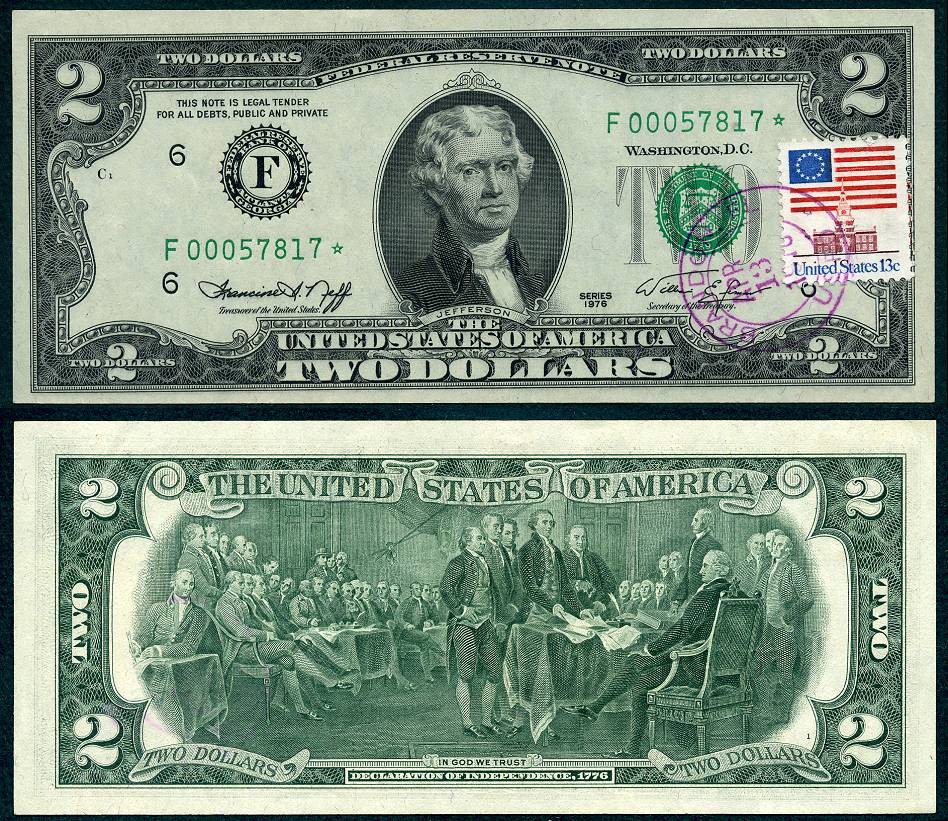 Two-dollar bill. On the front side there is a portrait of a third US President Thomas Jefferson, on the back side the process of signing the Declaration of Independence is depicted. 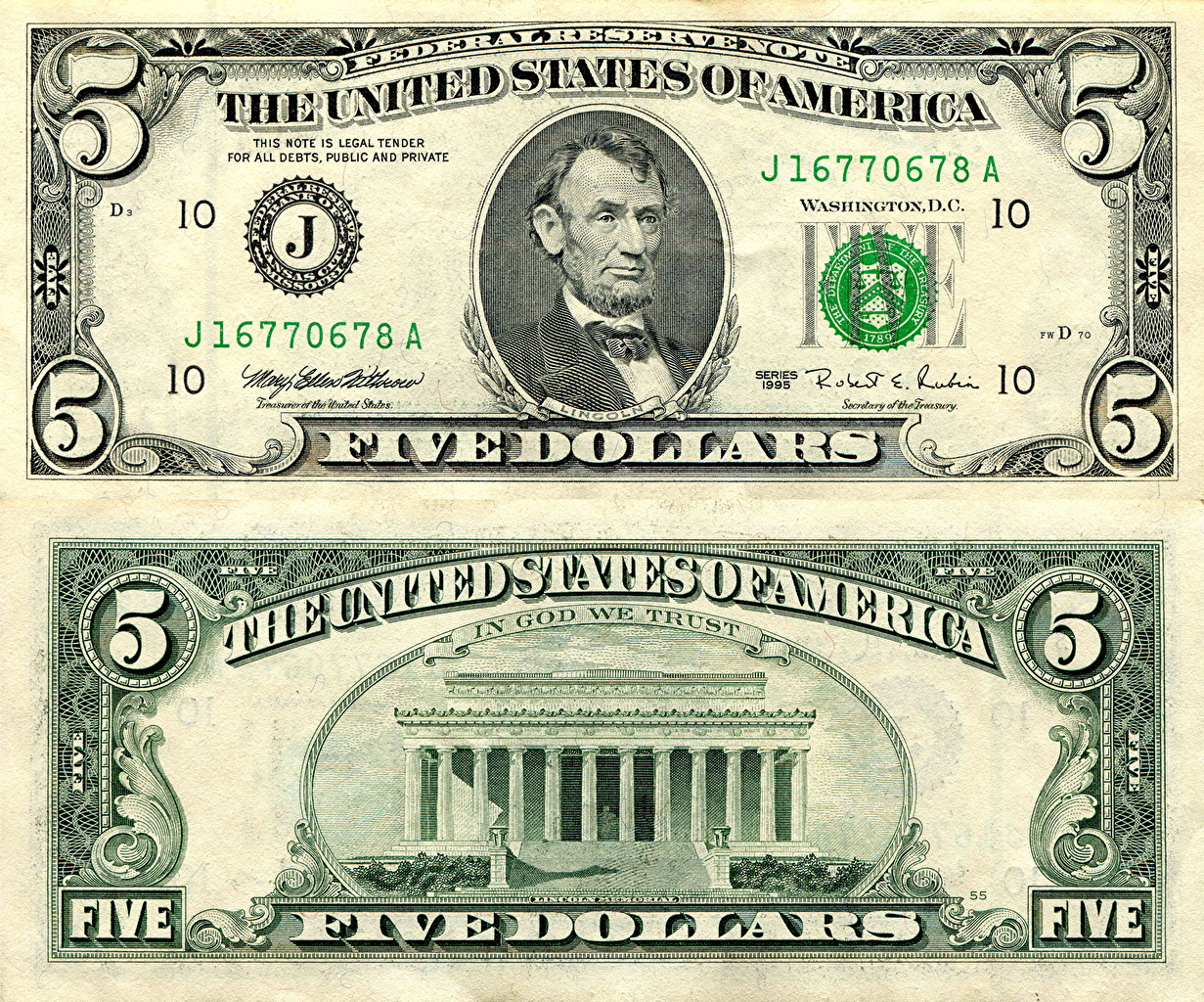 Five-dollar bill. The banknote depicts the sixteenth President Abraham Lincoln and the memorial dedicated to him, built on the territory of Washington. 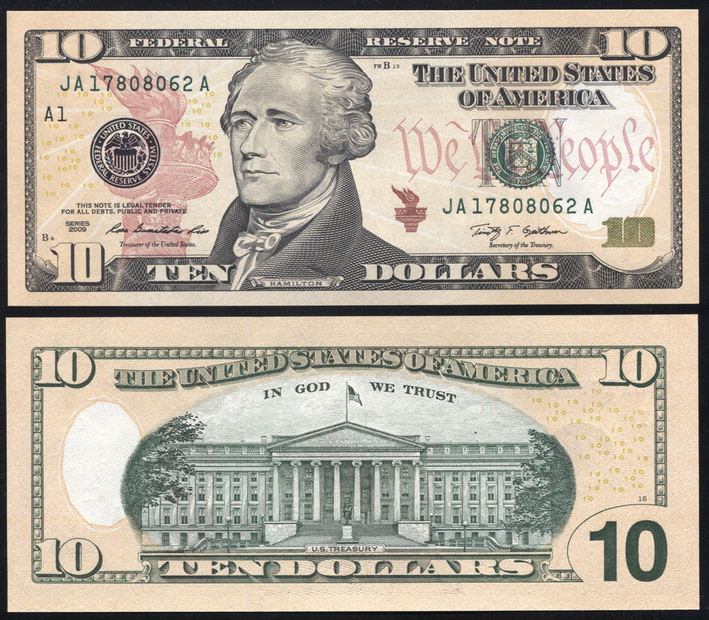 Ten-dollar bill. Here designers decided to depart a little from the accepted norms and place on the front side Alexander Hamilton - the first finance minister in the history of the United States of America with the facade of the Ministry of Finance on the back. 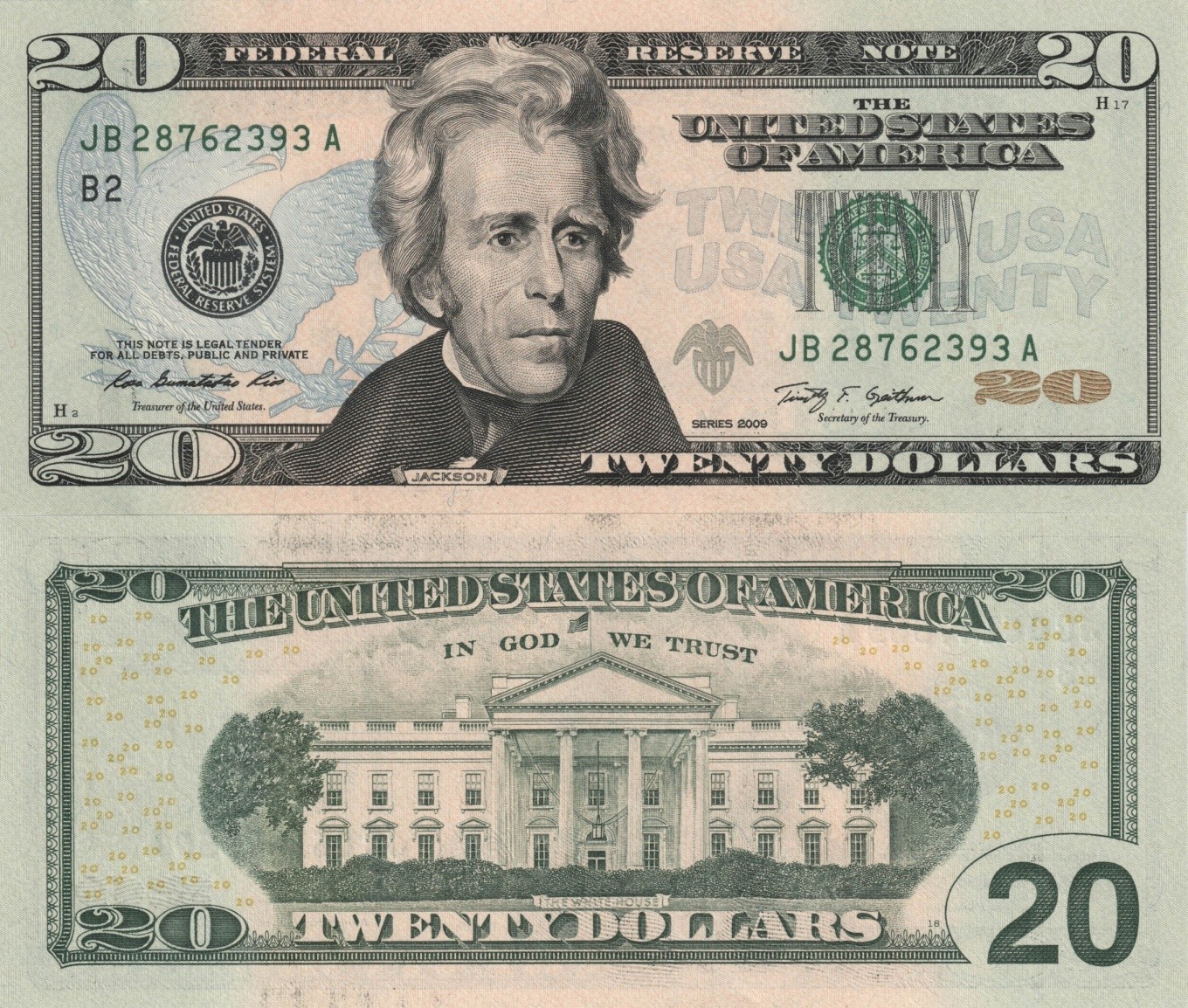 Twenty-dollar bill. The image of the seventh President Andrew Jackson is used in combination with the White House facade on the back. 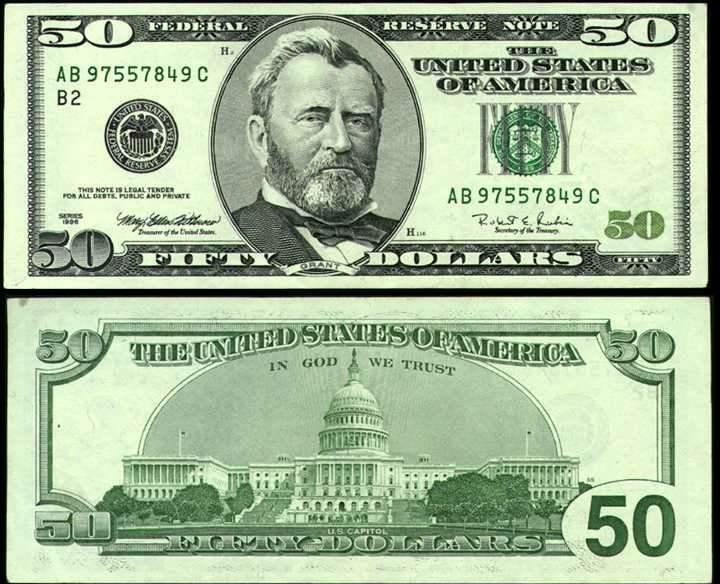 Fifty-dollar bill. On the front side Ulysses Grant is depicted, who became an 18th the president of the American state. On the other side, the Capitol building is represented to the public. 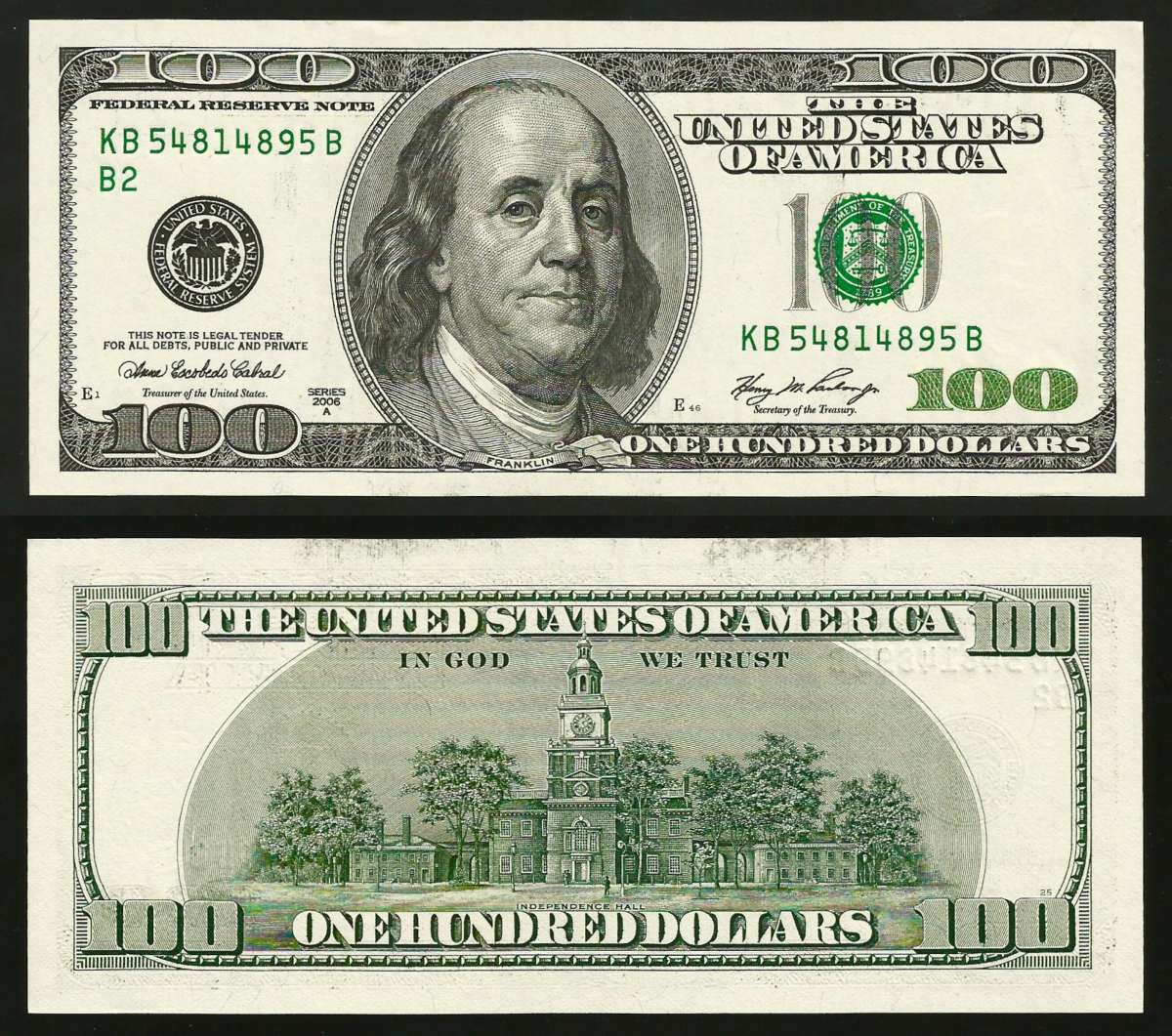 One hundred dollar bill. For today it is the most valuable paper banknote of the USA, which is in circulation. It depicts Benjamin Franklin, the only US president who, according to one of the prominent biographers, had never been a president. On the back there is the legendary building of Independence Hall.

Each banknote has several degrees of protection against counterfeitings, which include the following: a special printing method, a specific type of paper, availability of a unique serial number, a special dye, a standardized color palette transition, etc.

The impact of the US dollar on the world economy

Today, the US dollar is characterized as a universal unit of account in the world. Presence of the US currency in the economic life of other countries has a weakening effect on the national currency of these states. The result is complete dependence of establishing of pricing policy on positive trend of annual inflation growth.

American cars
In many respects, the American automotive industry is considered one of the largest in the world