The History of the US Emblem

The super majority of people on the planet know what the star-striped US flag looks like. In contrast, few people are familiar with the state emblem of the United States – especially since such a notion is missing among the official sources. The emblem of the state is the Great Seal, which is used to witness Government documents. It is in Washington, in the Museum Hall of the US Department of State, where anyone can see it. The Secretary of State is personally responsible for the safety of the Great Seal. On its front there is the emblem of the USA. The state symbol of power is shrouded in mystery, but first things first.

Historical milestones for creation of the US emblem

The need for development of state symbols arose immediately after proclamation of the country's independence, in July 1776. The newly formed state had neither a seal nor an emblem. The Continental Congress attracted the people who did not have any experience of creating heraldic signs to solve this problem. It's about Benjamin Franklin, Thomas Jefferson and John Adams, who, although not having artistic talent, enjoyed enormous prestige as figures who contributed to independence of thirteen states from British dominance.

Each of them had his own vision of what the US state symbols should be. The Congress Secretary Charles Thompson spent a lot of time trying to reconcile different points of view. However, more than five years have passed since heraldist P.E. Simitier, who joined the task, managed to present the project for printing in a paper form to the Congress.

Initially, the authors of the idea of a Big Seal planned to use biblical stories to create an emblem. In particular, Franklin suggested associating the fact of independence of the American people with the outcome of Jews from Egypt. In his opinion, the emblem should have the image of Israelites, leaving between the divergent waters of the Red Sea, fiery clouds and the inspired motto "The revolt against tyranny is in the will of God." Jefferson proposed to depict the people of Israel in the desert, led by Moses. Adams insisted on three characters: naked Hercules, starting climbing the mountain, guiding his Virtues and distracting Leni, reclining among the flowers.

None of the authors really mastered drawing and a visiting artist Simiter, apparently failed to creatively rethink the idea of ​​the authors. He drew a seal, both sides of it - an obverse and a reverse. On the front side there was the motto E Pluribus Unum, which means "Out of many, one" and a shield with the emblems of the six European nations who migrated to the United States: English rose, Scottish thistle, French lily, Irish harp, Dutch Lion, German eagle. The shield was supported by the goddesses of Justice and Freedom. On the reverse, the artist embodied the idea of ​​Franklin - exodus of Jews from Egypt.

Despite rather creative implementation of the author's ideas and participation in the project of the most influential figures of the United States, a design of the seal was rejected by the Congress. 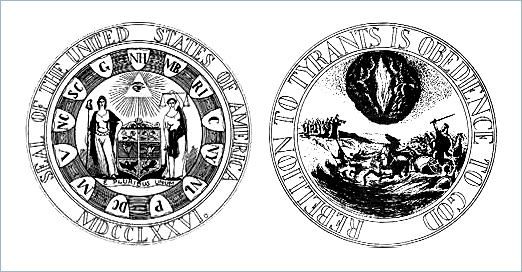 In 1780, the composition of the committee for development of the Great Seal changed. It included D. Lowell, W. Houston, D. Scott, and as a consultant Francis Hopkinson was invited, who already had experience in development of heraldic signs. It was he who realized the idea of ​​decorating the flag and emblem with red and white stripes with stars. Moreover, Hopkinson suggested depicting a female Freedom figure with an olive branch in her hand on the reverse. 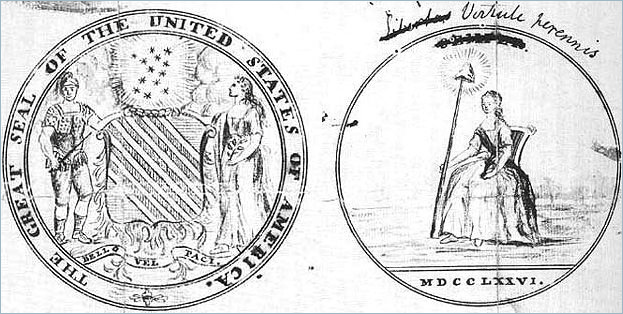 Alas, on May 17, 1780 the Congress considered the variant of the Big Seal presented by the consultant of the committee and emblem but did not approve them. It was decided to establish a third committee.

Third Committee and a final version

The brightest participant of the third committee was little-known William Barton, a lawyer, a passionate fan of heraldry. It took him less than a week to complete the previous versions of the images and prepare an updated sketch. The Congress did not really like what Barton did, but time was an issue. The documents on exchange of prisoners with Great Britain were almost ready which had to be verified. The sketch was accepted with the proviso that the Congress Secretary Charles Thompson would finalize it in the light of the comments.

The final version, revised by Thompson, took into account interesting proposals of all three committees. It contained a branch of olive trees and arrows, which were no longer held by the goddess, but a bird of prey. Many took it for an eagle, but in fact, this bald eagle is a truly American bird of prey (as it was believed at that time). Later it was found out that this feathered predator is also found in the eastern hemisphere, although this is a rather rare species.

The model was approved on June 20, 1782. The magic number "13" in it is preserved - this is the number of independent states from which the USA state began. 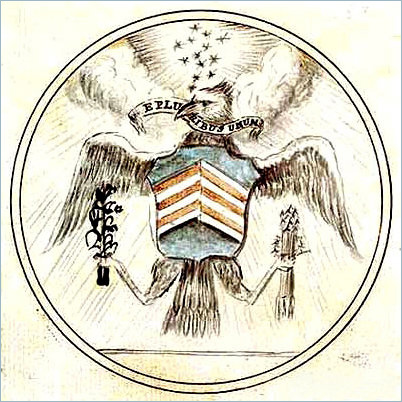